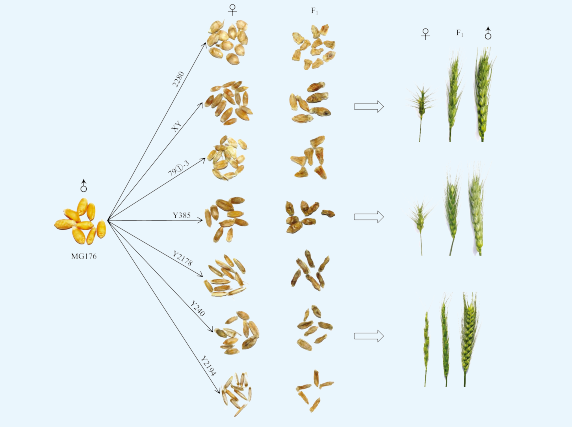 With the frequent use and increasing growing area of transgenic crops on a global scale, gene flow in transgenic crops has aroused great biosafety concerns. Pollen dispersal is the primary mode of gene transfer from a cultivated crop to the wild relatives.In our investigation it was found that wild relatives of wheat occur in sympatry with cultivated wheat in China and some wild relatives in wheat-growing region of Huanghuaihai flower synchronously with cultivated wheat. We collected and grew the seeds of these wild relatives and made hybridization with transgenic wheat MG176. The rates of successful artificial hybridization were 2.18-68.61%.However, it was difficult for the hybrids to reproduce naturally on account of low seedling emergence rates (0-2.86%) and pollen abortion. Backcrosses of the hybrids with either wheat MG176 or wild relative parent failed to produce seed except (Aegilops columnaris × MG176) × MG176 which had a seed set of 0.24% with zero seedling emergence when planted in the field. In simulated natural condition, no gene flow events were detected in the related wild relatives of wheat through 5 years of continuous monitoring.We concluded that the risk of exogenous gene flow from transgenic wheat to wild relatives was extremely low.
View full text 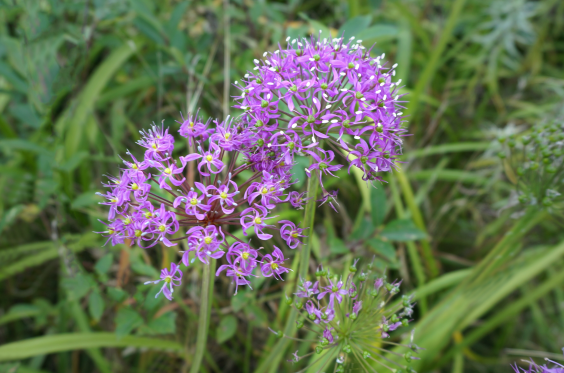 In order to find out the geographical distribution characteristics of the collected agricultural biological germplasm resources in Guizhou，the external geographical environment and the internal spatial performance of the collected resources were analyzed with the methods of spatial statistical analysis and diversity analysis. Firstly，the characteristics of elevation，temperature，precipitation and other basic geographic environment of germplasm resources are determined by spatial superposition and statistics. Secondly，the spatial distribution，the orientation and difference as well as heterosexuality，density and richness of germplasm resources are analyzed using the optimizing hotspot analysis，the geographic distribution center analysis and spatial diversity analysis. The results show that the interval of elevation and meteorological factors in the area where the resources are located is large，but most of them are distributed in relatively concentrated geographical environment. 68.7% of the germplasm resources were found to be distributed between 600 and 1400 m of altitude，65.1% were distributed between 15 and 17 degrees centigrade of average annual temperature，and 61.7% were distributed from 1250 to 1350 mm of annual precipitation. In addition，the 21 selected counties can basically reflect the spatial distribution characteristics of agricultural biological resources in Guizhou from the perspective of geographic space. Germplasm resources of different topics are cross-distributed，with the exception of edible fungi concentrated in the southwest. The resources of food crops，economical crops，vegetables，fruit trees and medicinal plants，which were provided by 14 ethnic group，are relatively evenly distributed in the province. Among them，the Miao ethnic group provided the highest amount（37%）of resources，followed by the Han（16%） and Buyi（15%）ethnic groups. The proportion of resources provided is less than 1% of the total. Thus，this study described the distribution status and characteristics of agricultural biological resources in Guizhou Province， which will provide reference for the formulation of relevant policies for effective protection and efficient utilization of biological resources in Guizhou Province.
View full text

Bitterness in melon (Cucumis melo L.) seriously affects fruit quality and marketability. The present study aimed to search for the molecular basis of bitterness in melon based on positive genetic strategy. An F2 segregating population was constructed using 100 individuals derived from a cross between the non-bitter female parent C69 and the bitter male parent C14. A genetic linkage map was constructed based on 2b-RAD sequencing, which was then combined with the phenotypic trait of fruit bitterness for QTL mapping and genome-wide association study, and a PAV was detected by the in-depth information of 2b-RAD sequencing. Key genes controlling fruit bitterness were determined by re-sequencing of the two parents. The F1 population showed strong bitterness in fruit, and the F2 population had 81 and 19 individuals with bitter and non-bitter fruit respectively, which approximated the 3:1 segregation ratio (?2=1.92，P=0.1659). A linkage map was constructed based on 477 SNPs distributed in 10 linkage groups. The total length of the linkage map was 337.79 cM, with an average distance of 0.71 cM between adjacent markers. Whole genome QTL mapping identified one QTL for bitterness, which explained 20% of the phenotypic variation on LG08 (corresponding to chromosome 9). Genome-wide association study detected seven SNPs significantly associated with bitterness in melon, which were located on the target QTL region for bitterness on chromosome 9. PAV analysis detected the presence or absence of a long fragment (from 21,707,702 bp to 21,743,072 bp on chromosome 9) in the QTL region, which explained the fruit bitterness or the lack of it in F2 population. The in-depth re-sequencing of the two parents were checked and it was found that the PAV region was larger, of about 62 kb, and was involved in nine consecutive genes (MELO3C005601, MELO3C005602, MELO3C005603, MELO3C005604, MELO3C005605, MELO3C005606, MELO3C005607, MELO3C005608 and MELO3C005609), of which five were cytochrome CYP450 genes. The constructed phylogenetic tree revealed that these five cytochrome P450 genes were in the same clade with the cytochrome P450 gene clusters CYP81Q58, CYP81Q59 and CYP712D8 involved in cucurbitacin C/B/E synthesis, and may function similarly. The phenotypes of F1 and F2 populations indicated that the fruit bitterness was controlled by one dominant gene in melon line C14. The PAV located in the QTL region co-segregated with the bitterness phenotype and explained 100% phenotypic variation in the F2 population, which suggested that the absence of the nine genes was the main cause for the non-bitterness of C69. The five cytochrome CYP450 genes are potentially part of the gene cluster of CuB biosynthesis pathway. Comparative analysis identified two bHLH transcriptional factors tightly linked with PAV in present study, which controlled the formation of CuB, CmBr (MELO3C005610) and CmBt (MELO3C005611) located in the consecutively linked regions in chromosome 9. The present results provide new theoretical support and target of molecular marker assisted breeding of melon.
View full text 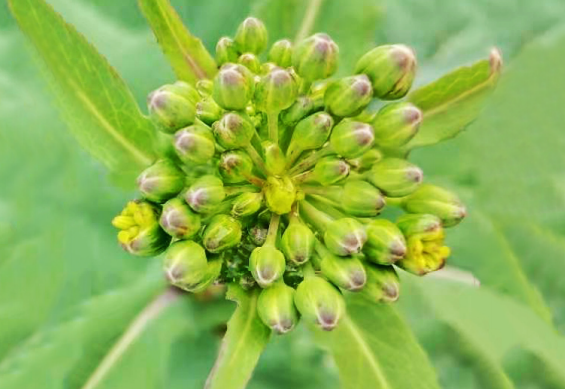 Distant hybridization is an important approach in crop genetic breeding and germplasm creation. In this study，the F1 hybrids were produced by interspecific hybridization between B. napus（2n=38，AACC）and B. carinata（2n=34，BBCC），and they showed determinate inflorescence characteristic from B. carinata and the intermediate morphology of both parents. F1 hybrids showed the expected chromosomal composition（2n=36， ABCC）and eight B.carinata（referred B）chromosomes from by GISH analysis. Their pollen mother cell（PMCs） showed multiple chromosome pairing configuration at diakinesis of meiosis，with main segregation rate of 17： 19 at anaphase Ⅰ（AⅠ）. A number of lagging chromosomes and chromosomal bridges appeared during AⅠ and A Ⅱ，which caused pollen abortion. By continuous backcross using its parental line Zhongshuang 11（B.napus）， the BC5F1 lines with determinate inflorescence were obtained and they had similar morphology with Zhongshuang 11. Their somatic chromosomes（2n=38）showed normal programmed meiosis，and only minor B chromosome signals but whole chromosomes were detected by GISH analysis. By marker assisted detection using 46 pairs of B genome specific SSR primers，B genome specific bands are detectable in F1 hybrid and a few of BC5F1. This result indicated that the chromosomal segments of B.carinata were successfully introduced into B.napus L.Thus， a number lines with new determinate inflorescence will become useful in rapeseed breeding for new varieties suitable for mechanized operation.
View full text